Innovation Made in Germany:
German biotech-research delivers excellent ideas for the Innovation Prize for the German Bioregions 2013 for the sixth time in a row.

The BioRegions of Germany are the regional initiatives for the promotion of the business application of modern biotechnology in Germany. The Council of the BioRegions (abbreviated AK-BioRegio) is a central network of 30 regional initiatives in Germany. AKBioRegio has awarded for the sixth time the three most innovative and patented research ideas from the life sciences which have excellence in market opportunities. Organiser of this year’s competition was BioPark Regensburg GmbH, cluster organisation of BioRegio Regensburg with 47 companies and 3150 employees, the second largest biotech region in Bavaria. The jury of ten chose in Regensburg three outstanding projects from the research fields for the development of novel medicines and more efficient biocatalysts. These prize winners were awarded in person by Dr. Georg Schütte, Secretary of State for the Ministry of Education and Research within the framework of the German Biotechnology Conference 2013 in Stuttgart.

First prize goes to Prof. Dr. Klaus Brandenburg of the Research Centre Borstel (north east of Hamburg). The Working Group at the Leibniz Centre there for medicine and biosciences is working on the development of a highly efficacious novel anti-sepsis medicine. Bacterial blood poisoning (sepsis) with 70,000 cases of death in Germany alone is the third most frequent cause of death and certainly in this time and age of increasing antibiotic resistance an ever increasing problem. The anti-inflammatory polypeptide, already patented, neutralises and targets endotoxins of the bacteria responsible for the sepsis. Initial experiments confirm its efficacy against multi-resistant bacteria such as MRSA. The jury has honoured this completely novel application with the prize. The second prize goes to the biologists Georg Schendzielorz and Stephan Binder from the Research Centre in Jülich. At the institute there for bio- and geosciences and systemic microbiology the prize winners have developed a special and new sensory system for the rapid and targeted search for highly productive microorganisms. The demand for such organisms is increasing with the increase in bio-based production processes. These are replacing more and more chemical and oil-dependent processes to increase efficiency and protect the environment. Until now though it has been very difficult to isolate highly productive organisms from thousands of cultures. The patented new detection method presented by the prize winners is already being trialled by industry partners and speeds up this important development of such production processes based on microoranisms via cost and time reduction.

The third prize goes to Prof. Dr. Arndt Schilling and Dr. Ektoras Hadjipanayi from the Klinikum Rechts der Isar in Munich. At the institute there for experimental plastic surgery the prize winners work on the problem of open, poorly healing wounds, known as chronic wounds which occur particularly in diabetes, tumour disease or in patients requiring nursing care. It is estimated that in Europe alone 13 million people are affected. Until now patients could only be helped with complicated transplantation and implantation procedures. The process under application for patent uses patient’s own blood cells for the production of the lacking wound healing messengers. The messenger substances are then transfered to a cell2 free bioactive bandage and placed on the wound to introduce natural wound healing. There has already been a first prototype developed to be brought into application via a network of cooperation partners.

The work of the three prize winners are convincing of their high degree of innovation. “We conciously award such research projects, which through excellent ground-laying research or with innovative new discoveries, significantly progress research in Germany “ emphasizes Dr. Klaus Eichenberg, CEO of the BioRegionSTERN in Baden-Württemberg and spokesperson of the Council of the BioRegions. The jury was impressed once again by the large proportion of high quality submissions. “I always find it fascinating to see that high quality research findings from the universities and clinics find their way into application“, commented Dr. Thomas Diefenthal, CEO of BioPark Regensburg GmbH and Acting Spokesperson of the Council. “As the organising bioregion we see the innovation prize perfectly placed in our hands to promote clasical business in the BioPark, a company of the City of Regensburg.“ Dr. Diefenthal is naturally also pleased that 12 submissions came from the State of Bavaria. The prize money of 2000 Euro is funded this year by the High-Tech Startup, BIOspektrum - the magazine for biosciences, S-Refit AG from Regensburg and Bayern Kapital. The German Trade Fair in Hanover funds the accompanying sculpture prize by the artist Paul Müller- Brand. Further sponsors have generously financed the competition: Dehmel& Bettenhausen, Patent Lawyers and Attorneys, V.O. Patents &Trademarks and BioPark Regensburg GmbH, from which this competition was organized.

You are cordially invited to the News Coverage at the German Biotechnology
Conference 2013
Wednesday, 15. May 2013
9.00 to 11.00 am
Haus der Wirtschaft
Willi-Bleicher-Strasse 19
70174 Stuttgart, Germany

Following prize giving it is possible to conduct interviews with the prize winners. 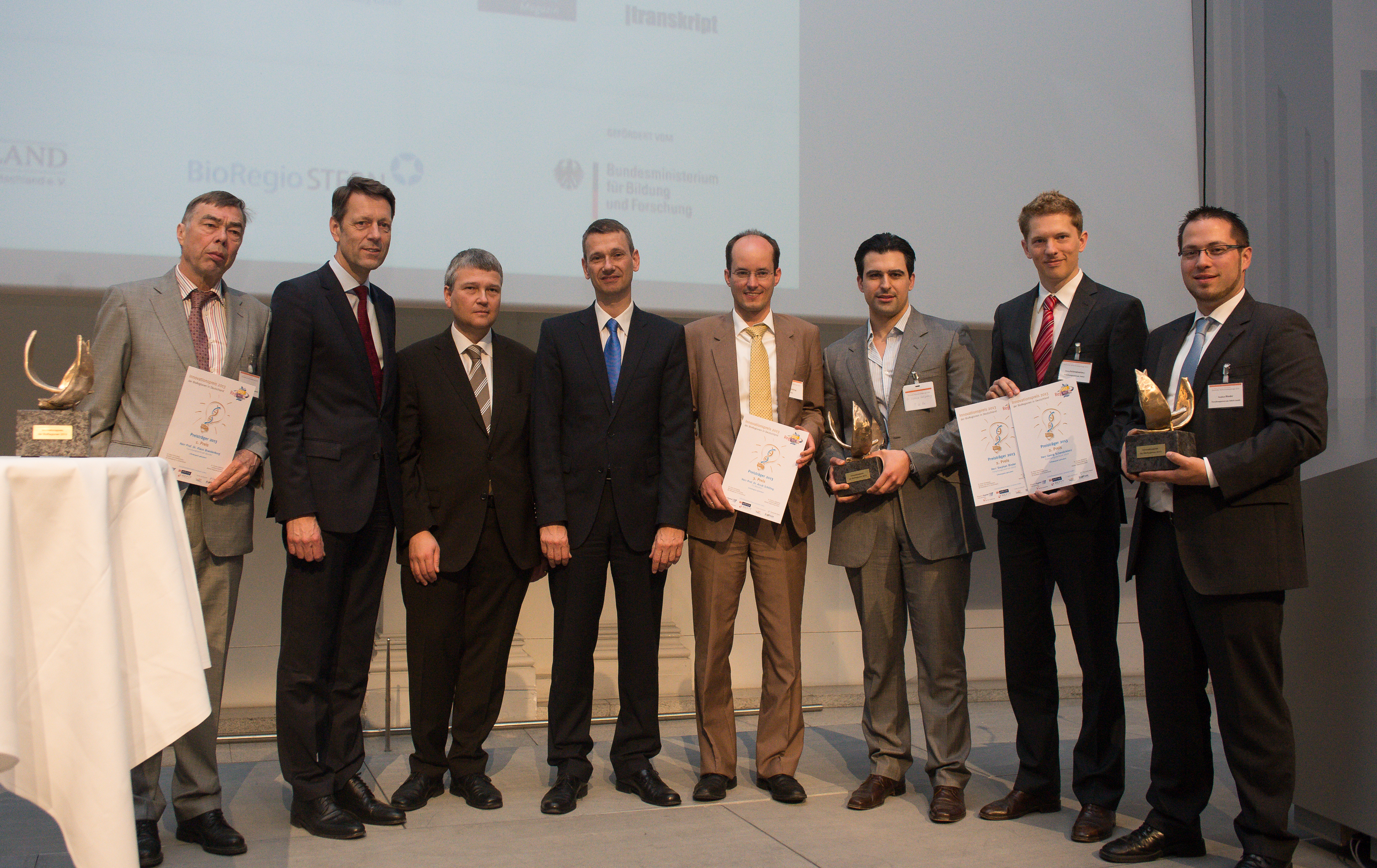