The Federal Economics Minister, Rainer Brüderle, invited a member of the board of BIO Deutschland, Jan Schmidt-Brand (CEO of Heidelberg Pharma AG), to accompany him on his trip to Israel on 13 and 14 June. During this two-day visit to Israel by the Economics Minister, the focus was on intensifying cooperation between Israel and Germany in the field of life sciences.

In his talks with Brüderle, Schmidt-Brand had the opportunity to report on the current situation in the German biotech sector. The main topics discussed were the funding of research and development (R&D) activities by venture capital; the existing discrimination against innovative small and medium-sized enterprises in comparison with large industrial concerns; and the promotion of R&D by so-called tax credits. In addition, Schmidt-Brand raised the topics of orphan drugs in terms of the compulsory discount and the free supply of substances under development to patients following clinical studies.

During his stay in Israel, Brüderle’s programme included a visit to ILSI-Biomed, the most important life science conference in the Middle East. The federal minister also opened the second workshop of the German-Israeli Life Science Committee in Tel Aviv. The title of the workshop was “New models for early stage financing of life science companies: German and Israeli approaches.” The workshop was well attended, with around 70 participants. Schmidt-Brand took part in a panel discussion during the workshop, where he reported on new examples of funding of young companies in Germany.

In Israel, Brüderle met the members of a German entrepreneur delegation, which was organised by the Israel Trade Centre in Berlin in cooperation with BIO Deutschland and BioTop Berlin Brandenburg. The delegation was made up of some 20 participants from companies and organisations from the fields of biotechnology, medical technology and the economy. 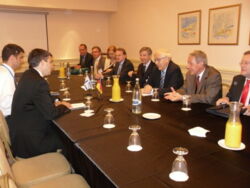 Meeting of the Working Group on Regulatory Matters in Munich

BIO Deutschland at the Trade Press Conference at Biotechnica 2010

German Biotechnology for the Chinese Market

International News I: Peter Heinrich Elected to the Board of EuropaBio