BIO Deutschland donated the entire proceeds from a benefit event - more than € 18,000 - to the German Alliance for Rare Diseases (ACHSE). Eva Luise Köhler, First Lady and the patron of ACHSE, received the cheque at the beginning of January in Bellevue Palace in Berlin, the residence of the President of Germany.

Eva Luise Köhler expressed her gratitude for the help given to ACHSE. She said, "It is nice that BIO Deutschland is supporting ACHSE so well. This contribution will make it possible to provide direct help to people with chronic rare diseases." Eva Luise Köhler added that the long road to diagnosis, as well as a lack of medication and of successful treatment methods were among the particular problems facing those affected and that these people could truly be described as medical orphans.

During the donation of the cheque, Horst Domdey, a member of the board of BIO Deutschland, emphasised the importance of demonstrating social responsibility, particularly during periods of crisis. He said, "With this donation to ACHSE, we wish to demonstrate our solidarity with the people who suffer from one of 7,000 rare diseases, especially during the current difficult economic situation." Horst Domdey added that the objective of the research and development activities of small and medium-sized biotechnology companies was also to produce innovative medication for rare medical indications and thus to help a total of four million affected people in Germany alone.

On 5 December 2008 more than 120 guests attended the benefit event in Berlin. Guests included many representatives from biotechnology firms and sector service companies, as well as from politics, the public authorities, science and the media. The event was sponsored by the companies, Lorenz Archivsysteme and Miltenyi Biotec, as well as by the Komische Oper Berlin and the Hotel de Rome. 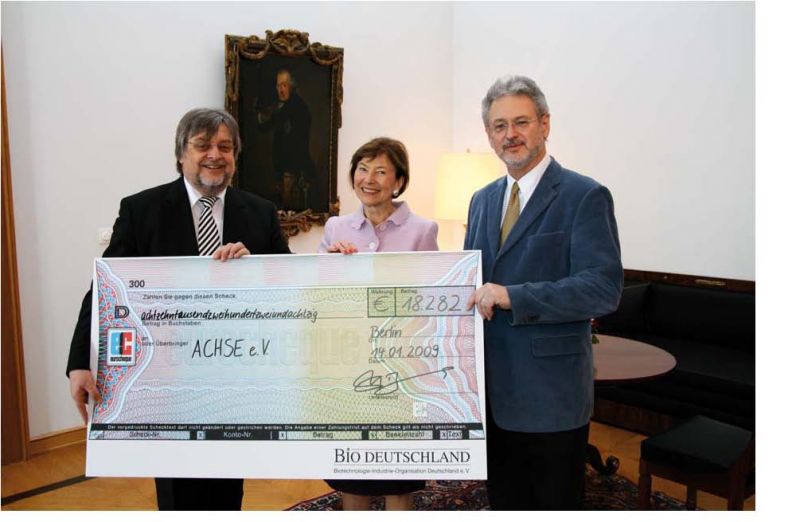 Eva Luise Köhler, First Lady and patron of ACHSE, and Christoph Nachtigäller, Director of ACHSE, receiving a cheque made out to ACHSE from Professor Horst Domdey, a member of the board of BIO Deutschland, at the residence of the President of Germany in Bellevue Palace.

Revision of the Medication Law: Hearing at the German Federal Ministry of Health

Animal Welfare: Meeting of Experts at the German Federal Ministry of Research

Biosecurity: Meeting of Experts at the German Federal Ministry of Foreign Affairs